There are four basic movements such as axial,lateral,angular and torsional that can be applied to bellows expansion joint.We introduce these four types movements for you as follow:

Axial movement is the change in dimensional length of the bellows from its free length in a direction parallel to its longitudinal axis.Compression is always expressed as negative(-) and extension as positive(+). The units for axial spring rates displayed in N/mm. 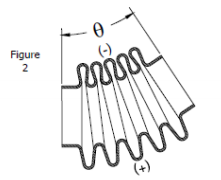 Angular movement is the rotation displacement of the longitudinal axis of the bellows toward to point of rotation. The convolutions at the inner most point are in compression(-) while those furthest away are in extension(+).The angular capability of a bellows is most often used with a second bellows.

The units for angular spring rates displayed in Nm/deg.

Lateral movement is the relative displacement of one end of the bellows to the other end in a direction perpendicular to its longitudinal axis(shear).Lateral movement can be imposed on a single bellows as depicted below but to a limited degree.A better solution is to incorporate two bellows in a universal arrangement as shown. This results in greater offset movements and much lower offset forces.

The units for lateral spring rates displayed in N/mm.

Torsional movement is the roration about the axis through the center of a bellows(twisting).Torsion destabilizes an expansioin joint reducing its ability to contain pressure and absorb movement. If torsion is present in a piping system,hinges,slotted hinges or gimbals are recommended to combat the torsion.