When an expansion joint experiences bending about its center, which is on the centerline and halfway between then ends of the bellows, this deflection is referred to as ANGULAR . It can occur in any plane that passes through the centerline , but the plane should be clearly indicated if the expansion joint is more complicated than the simplest type, i.e., only a bellows with flanges or pipe ends. As in lateral movements,piping analyses may reveal angular deflections occurring in more than one plane. With ANGULAR DEFLECTION, the basis for the proper selection is the maximum of the various deflections, and not the vector sum as in the lateral case. Multiple ANGULAR DEFLECTIONS in multiple planes produce a single ANGULAR DEFLECTIONS in a single resultant plane. As in lateral deflection,this plane must be understood if structural components are to be used. 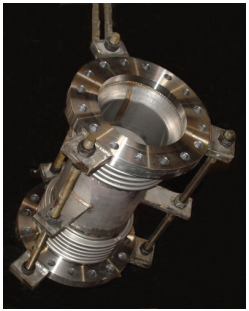