Bellows expansion joints which have been properly designed and manufactured for specified piping system conditions have given many years of satisfactory service. Failures, of course,have occurred which are of concern both to users and to reputable expansion joint manufacturers. Failures can occur for many reasons, but experience has shown that certain causes of failure fall into fairly distinct categories.The following list,which shows some typical causes but is by no means all-inclusive,in presented with the intent that , as knowledge of the causes of failure becomes more widespread,action can be taken to prevent or minimize these occurrences.

u Shipping and handling damage

Examples : Denting or gouging of bellows from being struck by hard objects(tools,chain falls,forklifts,adjacent structures,etc.)Improper stacking for shipping or storage;Insufficient protection from weather or other adverse environmental conditions.

Examples: Joints with internal liners installed in the reverse direction with respect to flow;Installing an expansion joint in a location other than as prescribed by the installation drawing;Premature removal of shipping devices;Springing of bellows to make up for piping misalignment;Insufficient protection from mechanical damage due to work in the surrounding area.Insufficient protection of bellows during nearby welding operations and failure to remove shipping devices before placing system in operation.

u Improper anchoring , guiding and supporting of the system.

u Anchor failure in service.

u Bellows corrosion,both internal and external.

u Packing of particulate matter in the bellows convolutions which inhibits proper movement of the bellows. 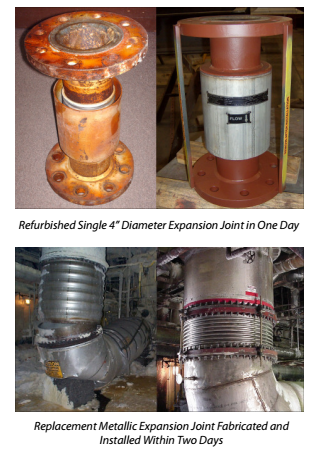